These are what our users had to say after trying out oil pulling with our organic coconut oil.

“I had a flu infection in Jan 2015 that escalated into a very bad cough. It was so bad that I was kept awake at night and hardly slept, just coughing away for a week at least. I still continued going to work, and was even coughing badly at work. This left me very tired and exhausted with no energy left for work. I was desperate to find a cure. A nutritionist friend of mine suggested I try coconut oil pulling as it had been proven to be effective against throat infections. Moreover coconut oil is known to be anti-microbial and anti-viral. I knew that from past experience, the cough syrups and medicines that the Western doctors gave would not work on me, so I decided to give oil pulling a try.

On the first night, before dinner, I took one big tablespoonful of Dr Gram Organic Virgin Coconut Oil and started swishing it round my mouth for 20 mins. Before my bed time, I did another round of oil pulling. The results surprised me: I slept through the night without coughing once. It was amazing to me. I felt so relieved and good that I was able to get back my sleep. I went back to work more energized the next day. I still coughed however, but I continued to use Dr Gram Organic Virgin Coconut Oil twice a day before meals. In a week I completely recovered from my cough and I am very thankful to my friend for introducing to me the concept of oil pulling using coconut oil.” 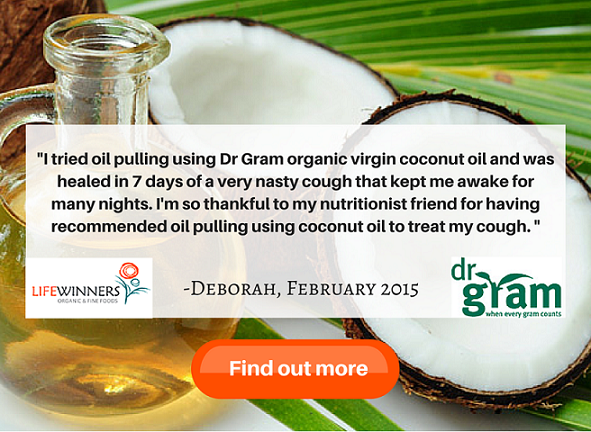 “I decided to try oil pulling last Saturday as opposed to an antiobiotic. I have an infection in my jawbone from a bad brown placed a year ago. I looked like a chipmunk and was in a lot of pain. I pulled twice Saturday, three times Sunday and three times a day since. By Monday morning my jaw was normal and I could chew on that side for the first time in months. I still have a lump in the bone but no more pain. I don’t know if it does everything else it claims, but I know it took my infection away.”

“About two weeks ago I was taking my inhaler about twice a day. Then I started oil pulling. You can draw your conclusions. But all I can say is that the very next day I stopped having to use my inhaler. I didn’t experience an immediate throwing-up of mucus. But what I did experience is a gradual coughing-up of mucus all throughout the day. Another thing that I’ve experienced at least twice is what happens if my chest becomes tight. Usually when my chest tightens it’ll stay that way and gradually gets worse until I take my inhaler. What I’m seeing is that when my chest tightens, I’ll go through maybe a three hour period where I’ll slowly begin to cough-up mucus until my chest is clear again. I have NEVER experienced my chest clearing-up all by itself after it has tightened. I’ve ALWAYS had to take medicine in order to get relief. During that time, my nose was stuffed a lot of the time. Since I’ve been Oil Pulling, it hasn’t been. I can only conclude that it must be due to the oil pulling.”

“I have been pulling for about 2 months now, the best thing that I noticed is the knee pain in both knees is completely gone. My feet don’t hurt when I first get up to walk after sitting. I have recommended this to one of my employees that was having extreme pain in his legs. He reported to feel much better after just a few days. I will continue this from now on. I pull oil while taking my shower and doing my morning routine. My skin is much clearer.”

I have been oil pulling for the last 6 months or so as I wanted to keep my teeth and gums strong and healthy. Oral health was something I did not want to lose in my old age (I am 63 now). After oil pulling daily for about 15 to 20 mins each time, i would brush my teeth. I noticed that my teeth appear whiter on brushing after oil pulling. It was also easier to clean my teeth and remove food bits stuck between my teeth. Thanks to good advice from my “teachers”, I am happy to say I still have healthy teeth and gums.

Get your organic coconut oil here to try this great home remedy today!